Many of our members have Apple iPhones and iPads (incl iPad Minis) which they use constantly. Without wanting to cause any alarm (because there’s no need for any!), I want to draw your attention to an official recall of the removable plugs from the power adapter. Apparently in a very small number of cases, the international plug adapter component (called a DuckHead) has broken potentially exposing users to electric shock. You can read the media version here and the Apple explanation here. This recall also applies to Macs using this type of adapter.

So, how do you know if your adapter is subject to this recall?

It’s easy. Your power adapter will look like this (left) and the “faulty” DuckHead looks like this one on the right. You will also need to separate the DuckHead from the charger and check that there’s a 4 or 5-digit number (or no number at all) etched in the guide channel on the DuckHead.

Click here for Apple’s explanation on how to check.

While it’s highly unlikely that the DuckHead on your adapter will break, it’s still worth taking advantage of Apple’s Recall Program and getting a replacement DuckHead sent to you. There are several options for obtaining a replacement but visiting the Apple Shop (in Central Wellington) is probably not one you’ll want to pursue unless you’re planning a trip to town in the near future. An easier option is to simply request your replacement online.

The online process will only work if you have registered for an Apple Account.

Step One: Obtain the Serial Number of your Apple device (iPhone, iPad or iPad Mini). This can be found on all iOS devices under Settings, General, About (well down the list). Write it down!

Step Two: Go to the Apple NZ website here and make sure you are signed in under your Apple Account (Click the handbag at the top right and it will offer to sign you out!)

Step Three: Click on Support along the black bar at the top of the page, scroll to the bottom of that page until you see the following. Click on the Apple AC Wall Plug Adapter Exchange Program.

Step Four: Scroll down the description of the recall until you see the following (well towards the bottom) and click on the word web at the end of the middle bullet point

Step Five: The next screen will ask for your country. Click the drop-down and select New Zealand and click Continue

Step Six: The next screen will ask for your device serial number. Enter the number you obtained off your device and click Continue

As I’ve only got to this point myself (on Friday), I can’t tell you how long it will be before we receive our replacement DuckHead(s) but I’m guessing Apple are already well set up to handle this recall so it won’t be too long.

Also note that if you have multiple Apple devices in your house, you will have to repeat the process for each Serial Number – there’s no shortcut!

Update: Saturday: This morning I received 3 emails from Apple confirming that my 3 requests for replacements would be sent “right away”. In case you’re wondering, that’s one each for my iPhone, my iPad and my wife’s iPad Mini.

Update: Thursday: Two of my replacement DuckHeads arrived by courier today in huge A3-sized bags (sent from Sydney!). I had to sign for them too! No sign of the third replacement – tomorrow I guess. I explained to the courier driver what they were and why she’d probably be back tomorrow and she rolled her eyes and pointed at a huge pile of identical courier bags on her passenger seat, sighed and said “That’ll be costing someone a lot of money!”.

The new DuckHead is appreciably different from the old one (see below) and Apple require me to return the old ones to them using the enclosed TNT courier bag (no cost to me, just some hassle!) 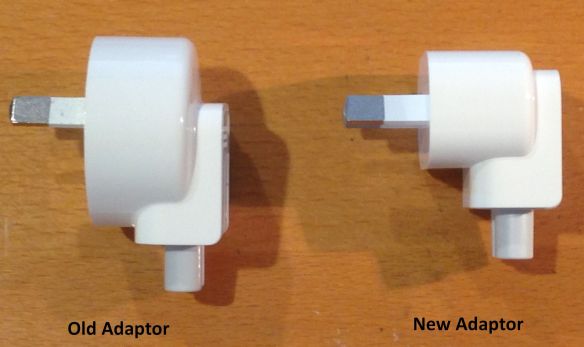 Update: Wednesday 18 May 2016 So I finally got around to returning the old DuckHeads to Apple.  Why so long you might well ask (and rightly so too!!)….well I had my reasons. As noted on the Thursday update above, I only ever received two replacement DuckHeads and I was waiting for the third one to arrive before sending everything back. You guessed it, no third replacement….ever. Today I decided to work out which of my three devices didn’t receive a replacement and it turns out to be my (now my wife’s) iPhone 5. I used the Apple web link here to see what they thought the status of my “service requests” were and they all say “in progress”. No special comment about the iPhone replacement – I guess it got lost “in the post”. The conspiracy theorist in me is wondering if they are holding my third DuckHead until I return the other two old parts – we shall see. I’ll keep you up to date if anything (ever) changes. Sadly, there’s nowhere on the Apple website for me to ask about the incomplete Service Request.

Update: Monday 21 November 2016 My printout of the Repair Status for my third DuckHead kept staring at me from my To Do pile so one rainy day last week (post earthquake!) I called Apple back again. I pointed out  that my third DuckHead had never arrived and that my Repair Request was still open in their system. There was A LOT of waiting on hold! Eventually, the polite lady came back and told me that the third DuckHead had indeed been sent to me and I assured her that it had never arrived. Eventually after more waiting on hold, she transferred me to someone in the Mac Team where I guess DuckHead replacements are taken seriously. He asked me to confirm my address and postcode for the third time and finally after more waiting on hold, he informed me that my replacement DuckHead would be sent forthwith. Well that’s 45 minutes of my life I’ll never see again!! The following day I received an email telling me that a parcel had been dispatched so right now I have my fingers crossed it will arrive sometime this week!

Final Update: Tuesday 22 November 2016 The parcel with the replacement DuckHead arrived yesterday (now, that was quick!). I’ve made the changeover, placed the old DuckHead in the return courier bag and I’m just waiting for the courier to pick it up. This must be costing Apple a truck-load of money….mind you, isn’t that what I paid for my iPhone in the first place 🙂 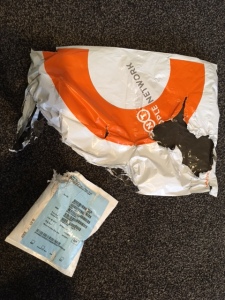 Update: Wednesday Well I thought it was all over but alas not so – my dog had other ideas. I left the courier parcel on the front doorstep for the courier to collect and guess who found it and decided to see what was inside! TNT Courier company can’t/won’t supply a new bag and I’m certainly not prepared to pay for a new bag (incl shipping costs) to sent a useless part to Australia! Plus I need a new delivery sticker ’cause the old one got eaten.

I rang Apple and, after they stopped laughing, they put me on hold for about 30 minutes. In the end, the very pleasant gentleman came back on the line, apologized for the wait due to high volumes of calls and advised me that I have been “granted an exception”. In Apple-speak, this means I don’t have to return the goods to them.